The Woolmark Company showcases the best of wool activewear at ISPO

Première Vision gave further proof that some boundaries between men’s and women’s fabrics are blurring. The lively UKFT British textiles stand featured many imaginative luxury fabrics which appealed to both genders, the finest from 13.5 microns ranging to 18.5 microns. Many also had the chic latest fashion fetish - a luxury selvedge: the mark of exceptional quality woven into the cloth, using heritage brand names and particular qualities such as Escorial; other special flocks such as Gostwyck Merino - the special luxurious Australian Merino wool woven by Clissold; or qualities including Holland & Sherry’s Crispaire - signalled in the gold lettering woven along the edge.

In this summer season, there was a good showing of many different fibres and blends with varying qualities, including pure wool and blends from classic mills in Italy, France, the UK, Turkey and China. Fabrics often had a lightness, enhanced by being semi-transparent or loosely woven, with versatility and a special sheen. High twists gave a cool feeling to wool fabrics.

Shine and sparkle was often unexpected on some womenswear wool/linen fabrics, derived from finishes which shimmered with a different colour. Light pastel tweeds with sparkle, a joy of grand luxe summer design particularly associated with Parisian glamour, were seen in featherweight versions by French and British weavers. Attractively seductive, the sort of fabrics regularly used by haute couture houses and this year with white and gold as a principal colour. 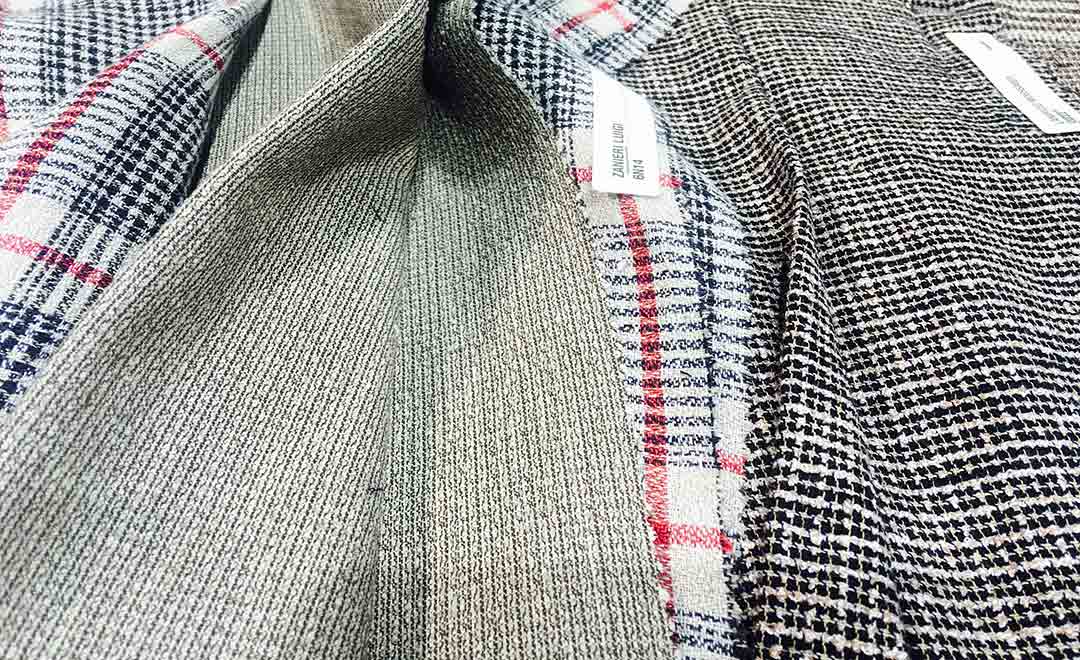 Very fine worsted or twisted worsteds sported coloured overchecks in pale blue or lilac, perhaps to be teamed with jeans, also commandeered by buyers of womenswear. Professional women want the quality and performance features which have entered into menswear as an essential, such as comfort and easy care for travel. Lighter weight wool jacketings with a more open weave were also trending in all areas, including Turkish brands and some Chinese mills, often in unusual fashion colours like a horticultural pink which was also seen in Italian collections. 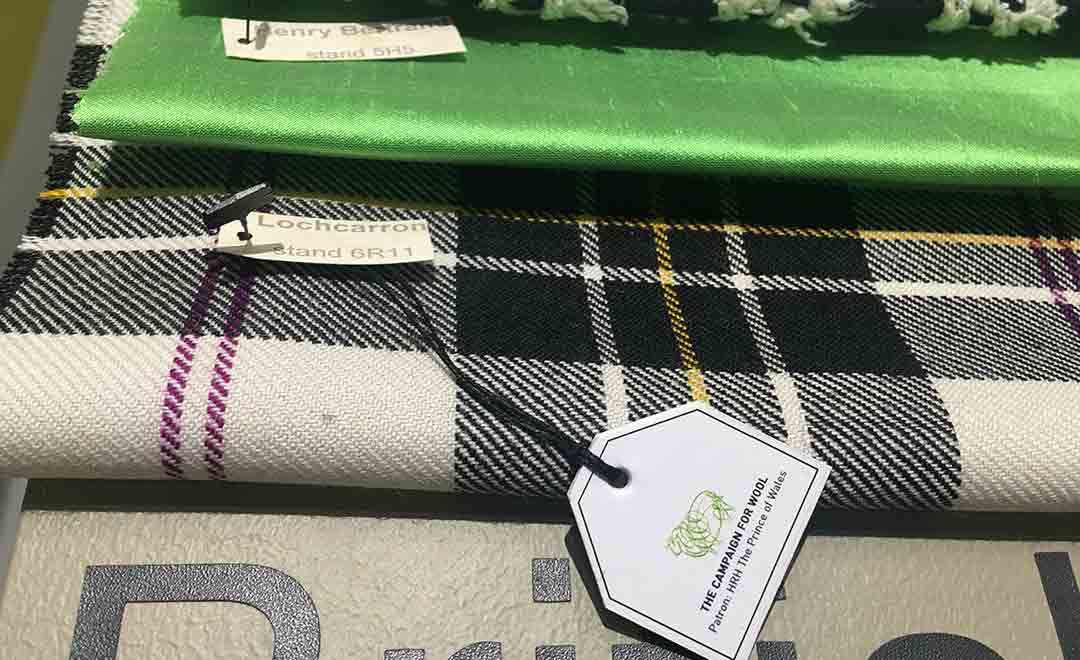 Lochcarron summer design on the UKFT stand with Campaign for Wool.

Black and white designs came in large, medium or micro designs in trans-seasonal approaches, bringing to the fore summer tartans, like Lochcarron’s black and white with a pink overcheck. Elsewhere, herringbone or gingham looks interpreted wool for summer very well. Likewise, the attraction of seersucker is seen interpreted in wool for a fancy summer jacket.

Athleisure has sprung wool into a new arena, where it is performing like a champion, led by bright colours, good design and the understanding of what it can do in combination with other yarns. Wool and synthetics can lend each other attributes which make activewear better and more attractive. Korean and Taiwanese exhibitors are specialising in this sporty look. One Taiwanese exhibitor had developed polypropylene with wool, alternating a wool surface on the inside of a synthetic face jacket or vice-versa. A double-face jacket was 46% wool, 54% polyester/nylon and acrylic.

Trans-seasonal fashion in general is also increasing, and part of this is often choosing the versatility of fine wool to bridge the gaps imperceptibly between one season and the other. Colours for this season included pink, blue, green, much use of graphic black and white wovens, and a palette which also had pales and whites for summer knits, mixing up coloured yarns as well as fibres.